SPARC AND SOLARIS, THE PAST AND THE FUTURE

Thank you to Erik and our friends at Mythics for allowing us to re-post this!

“A LIE CAN RUN ROUND THE WORLD BEFORE THE TRUTH HAS GOT ITS BOOTS ON.”
–TERRY PRATCHETT, THE TRUTH

Recently there have been a ton of rumors being spread that Solaris is dead, SPARC is dead and that these technologies are being abandoned by their creators.

Many of these reference a web site that is an anonymous rumor site for corporate layoffs. The same site also has rumors about Lenovo purchasing the technology, or Apple and Oracle making a deal around the hardware business, or even Oracle purchasing Accenture. All rumors, and all with anonymous posts and no verifiable sources. Yes, there are also rumors on the same boards about the layoffs, and how Oracle has supposedly fired all of the teams. The truth is that Oracle has made some cutbacks for efficiency, eliminating many duplicate development efforts, along with many of the “Science Projects” on the software side, technologies in which the Enterprise is no longer interested. But despite these cutbacks, there is still a large team working on Solaris and Oracle hardware.  In fact, there were even rumors that servers were canceled, yet months after the rumors, the supposedly canceled projects, like the X7-8 and the M8 servers were released by Oracle.

Earlier this year, Oracle published a roadmap, that showed “Solaris.Next” and “SPARC.next” as future products, and many in the rumor community took this as there was nothing after the 2018 dates, and the technology was being abandoned. At Oracle Open World, Oracle quietly announced several changes to the public roadmap. First, Solaris 11.4 would be the name of the next release, and that is to ship in 2018, with Solaris 11.5 shipping around 2019. Also, Solaris would be supported to at least 2034. Some hardware announcements before Oracle Open World included the M8 family of servers and Fujitsu also announced their next SPARC processor would be released in 2020.

Fujitsu…Yes, Fujitsu…announced a public roadmap for a new CPU! Many people are not aware that the “Scalable Processor Architecture” aka SPARC is an open CPU architecture, with multiple companies producing CPUS and servers based on the platform, with SUN/Oracle and Fujitsu being the leaders. This goes back to 1989, when control of the architecture was passed by SUN to SPARC International, Inc. an independent, not-for-profit organization that oversees and guides the SPARC evolution. Fujitsu has been making SPARC processors and servers since 1992. Today the companies work together offering a co-branded SPARC based solution.  Other companies like Cobham plc also make embedded systems using the technology.

The Fujitsu relationship dates back to 2007, with SUN/Oracle selling the 3000, 4000, 5000,8000, and 9000 series of servers, along with the more recent M10 and M12 servers.  Many readers have likely owned Fujitsu servers, and were not aware of their lineage. The relationship is still well in tact today and will likely continue with a new CPU and Servers that are on the Fujitsu public roadmap due in 2020.

There is a Future

Looking at the past, we see a history of new CPUs and servers over the last few years; sometimes two new CPUs have been released in the same year! This rapid advancement has continued to the point that the latest CPUs are 2-8x faster than the latest generation of x86 CPUs on a per core basis. The performance lead will continue for several more years, as the famous Moore’s Law slows down. The new generation of x86 CPUs are showing little performance gains on a per core basis. The larger gains are coming from physically larger CPUs with more physical cores.  SPARC processors gain these incredible performance leaps over x86 by leveraging specialized coprocessors to accelerate database workloads, encryption of data, and more advanced technologies like better memory management. On the Oracle CPU’s this is called ‘Software In Silicone’, and on the Fujitsu CPU’s it is called ‘Software On Chip’. While there are some differences between the two, both technologies significantly improve performance for accelerated workloads.

The Past and the Future Combine

The following graphic shows a unique look at both the recent history and future of SPARC and Solaris, combining both the Oracle and Fujitsu past and future offerings and public Roadmaps as of October 2017. New technologies are being released, and users of the SPARC-based systems and Solaris OS should know that not only with their investment will be supported for many years to come but this is a platform with a future. 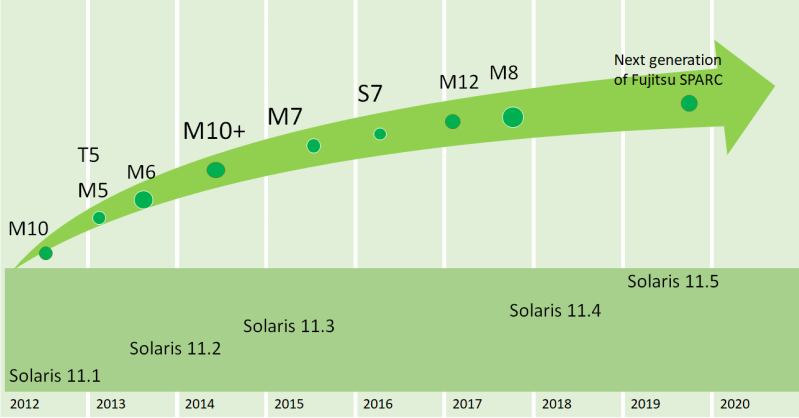 Looking for more information? Reach out to Eclipsys Solutions or our friends at Mythics to talk to one of our SPARC experts!